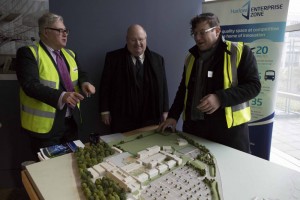 Secretary of State for Communities and Local Government (CLG) Eric Pickles has visited the Harlow Enterprise Zone (EZ) to mark the beginning of construction work that will pave the way for the delivery of a world class, state-of-the-art data centre campus and business park.

Development of the site has been made possible after Goldacre Ventures – the advisory firm developing and managing the London Road site – closed the latest round of private funding for the EZ, bringing the total investment in the project to just over £50m so far.

Senior figures from Goldacre Ventures, the HCA, Harlow EZ and Harlow Council gathered at the site to see Mr Pickles begin work on the phase one of the infrastructure programme which is set to continue until Q3 2015, creating over 1,000 jobs.

“It’s great to see how the Harlow Enterprise Zone is taking off. As the birthplace of fibre optics, the London Road South site is part of the UK’s rich history of innovation. We’re determined to resurrect that spirit and have invested £2.5 million to kick-start redevelopment, which has helped leverage £50 million in private-sector investment.

“And our ambition doesn’t stop there. We’re channelling a further £11 million to bring the London Road North site up to scratch to attract top-class companies that will create thousands of jobs. It’s proof our long-term economic plan is on track, delivering for both business and hard-working people.”

‘Mr Pickle’s visit is a massive vote of confidence in our ambitions to provide a world class, state-of-the-art data centre campus and business park that will play an important part in the long term future of Harlow and the London Cambridge corridor.

“This land has been largely unoccupied for a long time so it’s great news that a successful public-private sector partnership has unlocked investment to help drive economic growth and create jobs for local people. Our plans to create a business park and data centre campus will ensure the preservation of the site’s rich telecommunications, media and technology heritage.”

John Keddie, Vice-Chairman of the Harlow Enterprise Zone Board, said:

“We are delighted to see significant progress at the Harlow Enterprise Zone over recent months and I am pleased the Government has recognised the hard work and commitment from our public and private partners.

“The arrival of Anglia Ruskin University’s Med Tech Campus is an exciting boost for the project and will provide a strong interface between business innovation and academic expertise.

“We will continue to explore new opportunities for further development and promote the scale of opportunity this major investment location brings the region and indeed the entire country.”

“The last year has seen a real acceleration in the delivery of the Enterprise Zone. This progress, which is now bringing the Enterprise Zone to life, is being recognised by the Government. Today all partners on the Enterprise Zone Board were given the opportunity to talk to the Secretary of State Eric Pickles who visited Harlow to see for himself the significant progress being made to create opportunities for local people and local businesses and to attract inward investment.

“I’m delighted that a local construction company, Pryor, which employs local residents, is working with the site’s owners to create Harlow’s tomorrow.

“Harlow Council is very pleased to have played the leading role in bringing this development forward. The partnership working with Government, Essex County Council, the Homes and Communities Agency, South East Local Enterprise Partnership and the private sector shows what can be achieved when the focus of all is clear. We look forward to continuing to work with both public and private sector partners in the coming years to ensure that the Enterprise Zone contributes to the economic success of Harlow.”

“The Harlow Enterprise Zone is going to have an amazing transformational effect on Harlow, Essex and the wider region. It is a tremendously exciting project which will undoubtedly breathe new life into the area, bringing new high quality jobs and boosting economic growth.

“Essex County Council is happy to play a key role in assisting with improving the infrastructure in Harlow and injecting funding where it is needed. This visit by Eric Pickles MP demonstrates the importance the Government places on this scheme.”

Kao Park on the BBC news