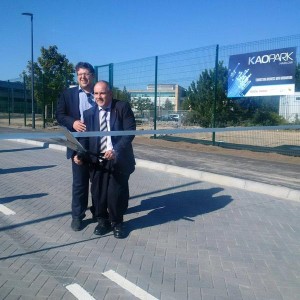 Robert Halfon MP, deputising for the Secretary of State for Business, Sajid Javid, today formally marked the opening of a new access road to the Kao Park site at London Road. This week’s completion of the new road is the first stage of the development of a new business park on the site and will provide a dedicated entrance for tenants. The road was constructed by local firm Pryor, who have delivered much of the demolition and infrastructure works at Kao Park since December 2014.

Kao Park will be the first part of the Harlow Enterprise Zone to be delivered and, when fully developed, it will represent an investment in the region of £200m in the 35-acre site. Previously home to Nortel Telecommunications, the site will be transformed into a new 21st century centre for discovery combining 215,000 square feet of Grade A office accommodation and a state-of-the-art data centre within a newly landscaped business park. The Kao Park data centre will be one of the largest campus data centres in the UK when it comes on stream.
This week, the first two tenants of the new business park were announced – Arrow Electronics and Raytheon UK. The new road will provide them and other future tenants with a dedicated access.
As part of its ongoing commitment to the development of the Harlow Enterprise Zone and the M11 growth corridor, the Government’s Homes and Communities Agency has invested £2.5 million in site clearance and infrastructure upgrades to help accelerate this important development. Harlow Council has also provided a loan of £2.5 million to invest directly in the site upgrades, including the development of this new road.