As part of the growing success story of UK Enterprise Zones, the Kao Park Data Centre will be at the cutting edge of what data center campuses have to offer. 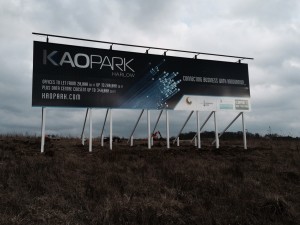 Kao Park, strategically located along the emerging London-Cambridge-Stansted corridor, is historically a center of innovation following the discovery of the fibre optic cable here in 1966. The site will comprise the creation of a data center complex combined with the development of a new business park on the remainder of the site, building on this tradition of innovation and new technology.

Kao Park is the first part of the Harlow Enterprise Zone to be delivered and will be the only campus near London to provide occupiers with Grade A office accommodation (215,000 sq ft) and a state-of-the-art data center. The Kao Park data center will be one of the largest campus data centers in the UK when it launches in 2016.

“Kao Park is a great example of a public-private partnership that unlocks investment, leading to economic growth and job creation,” stated David Bloom, Chief Executive of Goldacre Ventures. “We’ve turned an underutilized site into a business and technology center that will preserve the sites rich telecommunications, media and technology heritage.”

The development will see the creation of the data center on the form Nortel Networks site with world-class data capacity for international companies of all sizes. The data capability of the site is a significant attraction for businesses moving to the area.

“As the birthplace of fiber optics, Kao Park has the legacy, workforce and supporting infrastructure to support a world class data center campus,” commented Everett Thompson, WiredRE CEO. “With the additional benefits of enterprise zone status, proximity to Cambridge and London, and successful tech office tenancy, this campus is poised to become a regional hub of telecom, cloud, and data center innovation.”

The Kao Park data center will build on the UK’s reputation as a leading processing hub, while providing an environment conducive to pioneering innovation and work-life balance.